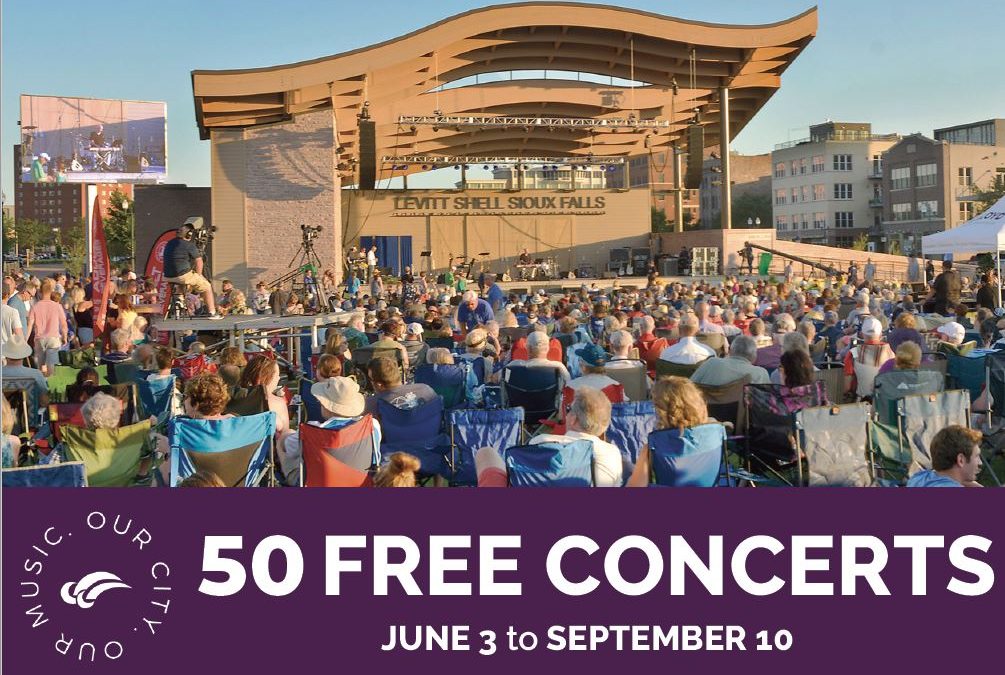 Levitt at the Falls is pleased to announce their biggest concert season yet with a full calendar of 50 FREE concerts for the 2022 season. The Levitt team has assembled an exciting season of professional artists to perform for 50 FREE concerts at the Levitt Shell in Falls Park West starting on Friday, June 3 and concluding on Saturday, September 10. The 2022 season, sponsored by Sanford Health, will consist of local, regional, and national professional artists offering a variety of genres and musical styles. With 10 different musical series offered (Americana, Country, Funk & Blues, Garden Fresh, Homegrown, Rock & Roll, Vintage Vibe, Women of Song, World Music, and a Family Series), there will be something for everyone.

Levitt concerts will be held each Thursday, Friday, and Saturday night of the summer from June 3 – September 10.  Levitt events will include opening acts featuring local performers, a variety of food vendors, and drinks available through JJ’s Wine & Spirits. Each concert will be live streamed and projected on the large Daktronics board onsite in partnership with South Dakota Public Broadcasting.  The lawn will open at 6:30pm each night with music beginning at 7:00pm. Additionally, Family Series performances for kids and youth groups will be held on 5 Friday mornings throughout the summer with the lawn opening at 10:00am and music starting at 10:30am.

The 2022 Season is presented by Sanford Health. Opening night on Friday, June 3 will feature the nine-piece powerhouse soul band The Burroughs, who bring a fresh and energetic take to their brand of “sweaty soul music.”  Closing night on Saturday, September 10 will feature Lee Rocker — a founding member of the GRAMMY-nominated rockabilly revival band Stray Cats. Other season concert highlights include the return of 2019 favorites Brulé and KORY and the FIREFLIES, a stop on the Levitt National Tour featuring Nashville pop trio The New Respects, and the return of international touring acts including Socks in the Frying Pan, Parranderos Latin Combo, and Lemon Bucket Orkestra.

The Levitt at the Falls 2022 season also features Innoskate Sioux Falls, a free festival event with concerts, skateboarding, invention activities, visual art, and panel discussions featuring top professionals from the skateboarding industry.  Innoskate Sioux Falls is offered as a partnership from Levitt at the Falls, The Smithsonian’s Lemelson Center for the Study of Invention and Innovation, and USA Skateboarding.  Featured concerts during the Innoskate Festival in Sioux Falls on July 7-9 will include the Smithsonian Jazz Masterworks Orchestra, Dessa, and Meet Me @ The Altar.

2022 LEVITT AT THE FALLS CONCERT SEASON PRESENTED BY SANFORD HEALTH

*For the full concert details and artist bios, visit our Events Page.