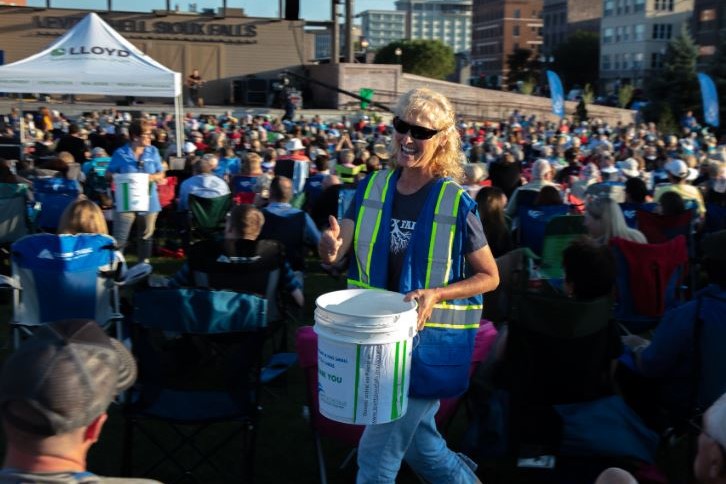 Diane Olson was the first female Master Inventor for IBM in the Midwest.  She had a high-powered career in the ground-breaking field of Computer Science in the 1980s-early 2000s and was able to travel the world (even to Antarctica!).  When she retired, she followed her passion for historic preservation and the performing arts, and moved to Sioux Falls.  We were lucky enough to get to know Diane as one of our core volunteers on the Levitt during our inaugural season.  You might recognize her as the consistently cheerful, energetic face greeting you on the lawn, dancing with you in front of the stage, or passing the bucket through our audience.  Read on to get to know our fantastic volunteer Diane Olson.

Hi, Diane!  Tell me about yourself.  My name is Diane Olson and I moved to Sioux Falls in 2016 after retiring from IBM.  I worked in Rochester, MN in the Development Lab as a Software Engineer.  After I retired, I was looking for a place close to Iowa where I have family.  And I found Sioux Falls and got a deep sense of the desir 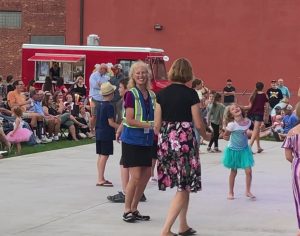 e to preserve history.  There was a lot of people and community effort to maintain the historical buildings and neighborhoods.  So I bought a historic home, and I moved here and spent about a year and a half restoring it.   And then I started to get involved with the community by becoming part of the historical society and looking for ways to volunteer.  I was particularly interested in the theatre, so I started ushering, and I was able to meet some really cool people in the area.  And then as new venues opened up, I found ways that I could get involved, and found the Levitt.  I thought, if I am going to be here enjoying the music, why not help out?  And it was really clear that the people involved at the Levitt, the staff and the volunteers, were the personable kind of people that you want to include in the wealth of friends to have in your life.  So the rest is history.

What other organizations do you give your time to in the community?  Historic preservation at the State Theatre is another important project of mine.  We just got the artifacts moved to safe places now for the construction to continue into its next phase.  I now have historic photographs that I need to label and archive and make available—the State Theatre has been sharing several of those on social media as we complete the project.  I’m also on the Board of Directors of the Minnehaha County Historical Society (MCHS).  In that position I’ve been able to set up a fund for preserving the historical artifacts and rooms at the State Theatre.  One of the theatre’s goals is to offer historical tours to school groups, but we need to open some historical rooms so that they can see areas like the old projection room, the spotlight room, or one of the old dressing rooms, so that is where the historical society has setting up the fund to help.

How did you get involved with the Levitt?  It wasn’t until July 4th.  My neighbor and I always do the 5k walk/run and I spent the rest of the day downtown with the parade, and the picnic, and the next thing was the Levitt this year. During the concerts on the 4th, I saw the volunteer coordinator, Laura Mullen, dancing on the lawn, and I thought, she is doing what I want to do.  I need to be up there dancing around and helping, because it was hard to sit still.  And I just got the bug. At that point, I couldn’t stay away.  A concert or two later, I went over to the information booth and saw that I could sign up to volunteer.  And I said, “I’m signing up…please call me quick because the next one I want to be here volunteering!”

What were some of your favorite concerts this year?  I really liked the High Kings.  They were fabulous.  I also loved KORY & the FIREFLIES.

What bands or groups would you love to see at the Levitt?  I love to see the local professional groups perform.  What a fantastic venue to showcase the great local talent.

What do you find most rewarding about your time volunteering at the Levitt?  The people, no doubt about it.  The music was fantastic, but it was the people that were drawn there because of the music…the variety, the quality.  I love that it was family-oriented and people would bring their children.  And everyone would get out dancing.  Music makes people open up, and so whoever you are sitting next to, you can strike up a conversation and they are having a great time, loving the venue.  So getting to know people that you would never have the opportunity to run into, let alone talk to.  And the fact that everyone was doing that with everyone else.  Everyone just felt so connected– music does that.  The friendliness of the volunteers just made everyone feel warm and there was just a light, a magic every time.  Every time. 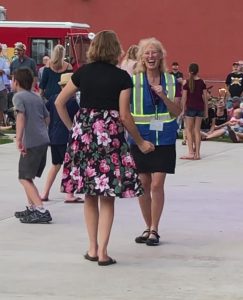 How did you master those fabulous dance moves?  It’s interesting that you should ask.  When I graduated high school, I had decided that I wanted to go to the University of Iowa because they had a dance program.  And I never was a dance major, but I audited all the dance classes and was getting selected for performances alongside the dance majors.  I once took a master class with the New York City Ballet and performed the perfect pirouette under pressure after watching a top-performing dancer unable to land it.  This was an amazing moment as ballet was not my specialty, and I was involved in more jazz dance.   I let that gift of performing well under pressure inform my professional work at IBM, where I pushed myself to high levels of excellence and responsibility.  So while I didn’t dance professionally, I still have some of that technique and the ability to let music move me.  Maybe that is what people are seeing  :).

Interested in volunteering with the Levitt?  Visit our Volunteer Page to learn more and join our team.